Trains are a daily part of our life here in Fonda and very rarely would we say they're beautiful... they're very loud and it seems like aaaaall the time. (Three have gone by while I type this quick post)
But when the trains aren't barreling through our tiny town there is this tempting urge to hop on those tracks and take a photo on them. Picture the most perfect photoshoot on train tracks surrounded by the most perfect fall foliage. At the right angle the tracks can be the perfect spot for photos.
***Disclaimer this is not my photo but out of a AAA magazine *** 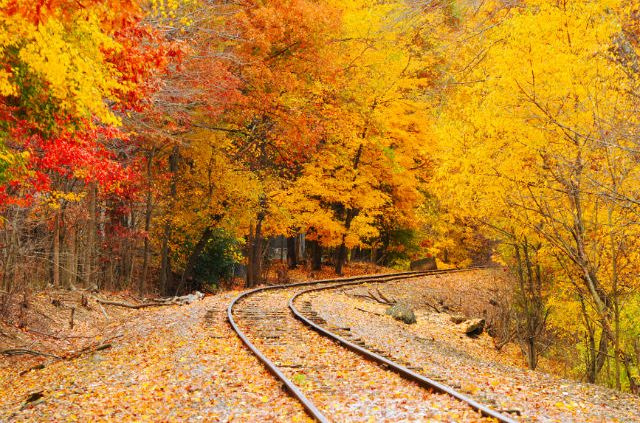 We have all seen it, or wanted to see it and wow is it gorgeous! I mean really, that is a a perfect frame for a photoshoot!
I've been there, trust me! About 10 years ago when I got my first camera I hopped down there next to the tracks to get a "super cool train track photo".
When I see a photographer do the same I fully understand their reasoning because I wanted to and did do it. But now? I  have this huge urge to write about it because 10 years I did not know what I know now about train tracks.
I'm a part of several photography groups online so I see a very wide variety of locations, states, countries and skill levels posted. This is a common topic that comes up.
And I really think because we grew up around the tracks we have become complacent to just how dangerous they are.
They're just background noise to us and we don't realize just how fast they're coming through and just how dangerous and even illegal it is to walk on the tracks.  Several articles like the following were created to urge people to stay off the tracks.

"At least once per month, we hear about someone else—a photographer, photo shoot subject, sometimes just kids messing around—who was struck and killed while taking pictures on train tracks."

A little louder for those in the back AT LEAST ONCE PER MONTH! Y'all.. that's a lot!

Several years ago I remember hearing about a movie that was being filmed on train tracks and one of the camera men got hit and died. That is when I started saying no to photoshoots on the tracks. I no longer was unaware of the dangers and the risk. I remember watching the family be interviewed and I remember the desperation and devastation in their plea to the public to stay off the tracks.
Any time you say no to a clients idea, which believe it or not happens a lot, is risky.
Because we see photos all the time on train tracks we don't realize how dangerous it is. So yes, of course, it can be a risk losing business. It can come across as uptight, what's the big deal right ? But i'm here to tell you the intent to keep a family safe during and alive after a photo shoot far outweighs the urge to shoot in a dangerous location just to find some nice leading lines. Leading lines are everywhere we look, not just on train tracks.

My plea to anyone reading this... unless the train tracks are overgrown and unused anymore, and I mean really verified by CSX that they're not used, don't shoot on tracks. Is a cute photo worth your family's life ?